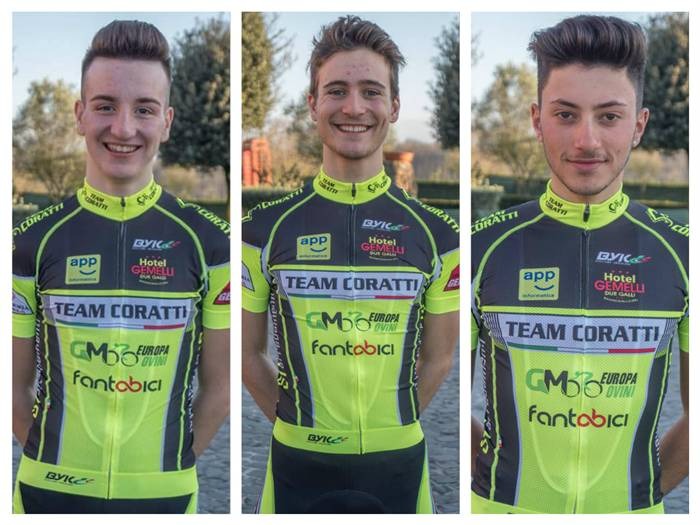 GM Europa Ovini continues its project of growth of young riders: three riders will make its first year under 23 among the ranks of #blackandgreen team. Mirko Iafrati, Piergiorgio Cardarilli and Francesco Gabriele are three riders who showed off this year in  Team Coratti – GM Europa Ovini, youth team led by patron Gabriele Marchesani.

Mirko Iafrati, born in Sora (Fr), has showed off this year with three victories, which allowed him to take part to Giro della Basilicata with the uniform of the Italian national team directed by Rino de Candido. The successes of this boy, only 18, arrived at Gp Mocaiana of Gubbio (Pg), the Trofeo Luigi Ferretti of Ascoli Piceno and the Gp of Teramo Sant’Omero. During this season he also got four second places and three third places.

Like Iafrati,  Francesco Gabriele too was born in Sora (Fr), and he has won three races in 2016. Two of those victories come in Abruzzo, at Pescara Campo di Giove and at the Trofeo Santa Maria Goretti. The rider, born in 1990, has highlighted his talent in Sant’Eraclito of Foligno, where he won the Cronoscalata della Quintana.

Piergiorgio Cardarilli, born in 1997 class of Alatri (Fr), has showed off this year with the victory of the Trofeo Groupama of Foligno, he then got 4 second places and 2 third places.

“These three guys could grow in the recent years – said directeur sportif Pierluigi Terrinoni – thanks to GM Europa Ovini who invested in a young rider development program. The boys will race without pressure, but with the aim to futher improve and develop their great potential.