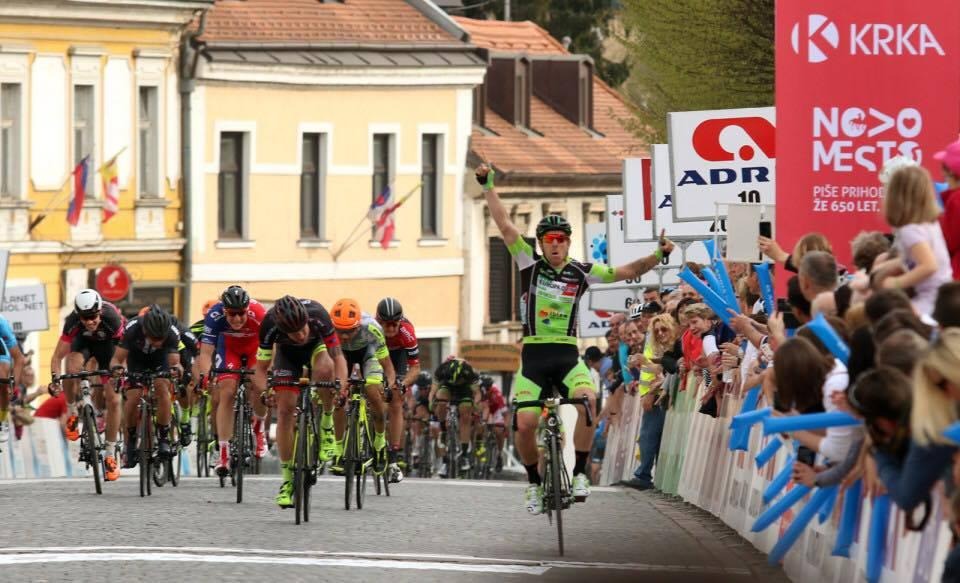 Filippo Fortin got the first win of the 2016 season. The #blackandgreen leader has indeed won the GP Adria Mobil, the Slovenian race that was held on the traditional cobbled path of Novo Mesto, thanks to the great work of the whole team.

During the race three riders broke away from the peloton, a great Davide Pacchiardo bridged the gap in the final stages and Fortin got the win in his own way: with a long and majestic sprint and by crossing the finish line ahead of Alberto Cecchin (Roth Team) and Eugenio Bani (Amore & Vita Selle SMP).

For GM Europa Ovini’s patron Gabriele Marchesani that is the first 2016 victory and the third one in team history (2 victories in 2015).
“This victory has been a relief – said Filippo Fortin – it was an angry sprint, I sprinted in the best way I could and I’m happy my victory repaid the great team work because they all do an excellent job every day. I also thank president Marchesani for the great confidence: after placing several times in the top 10 and after the second place here last year I finally managed to impose myself. “

Roberto Damiani, team manager, was on the follow car with directeur sportif Alessandro Donati. “The team did a great job and everyone, from first to last, run a perfect race– explains Damiani – and now the goal is to continue in this direction. I’ve been here for just a few weeks but I’ve found the right environment, the guys have realized that together they are a very strong team and they literally dominated the race. Compliments to everyone, not to riders only. In some small way, see also the final cobbled race in Novo Mesto, I would say that we have won our little Tour of Flanders, in the hope of keeping growing and maybe, one day, to take part to the real one”