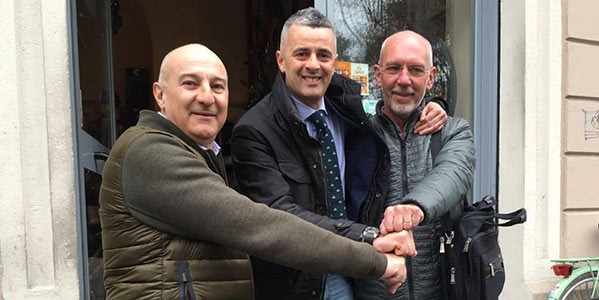 Roberto Damiani becomes part of the GM Europa Ovini’s staff. The Lombard manager who, for more than 30 years has worked for the most important teams in the world, the latest of which are Omega Pharma Lotto, Lampre-Merida and United Healthcare, will lead the GM Europa Ovini with the role of team manager.

The first race that Damiani will follow in his new role will be the Settimana Internazionale Coppi e Bartali, which will also be the next event on the calendar for the #blackandgreen team, from 24th to 27th of March.

For GM Europa Ovini the arrival of Roberto Damiani in the technical staff is source of great pride and is undoubtedly an excellent starting point for a further grow of the team. Together with Damiani, the Lombard entrepreneur Ezio Panzeri will also officially become part of the management staff as shareholder of the team’s management company.

“I am delighted to be joining a very ambitious team with an all-Italian project – says Damiani – the proposal that was made to me by the team president, Gabriele Marchesani, as well as by Ezio Panzeri, is of great interest. The project is very ambitious, because the main objective is the promotion and development of young riders. In this team there are all the possibilities to do a great job“.

” The entry of Roberto in our team will certainly be a big plus – says patron Marchesani – he has a great curriculum and will enable us to make the qualitative leap that we are trying to do. Ezio Panzeri and I are already working to try to set up a professional team starting from 2017: we are not sure yet if it will possible, but our ambition is to grow in the next season”.