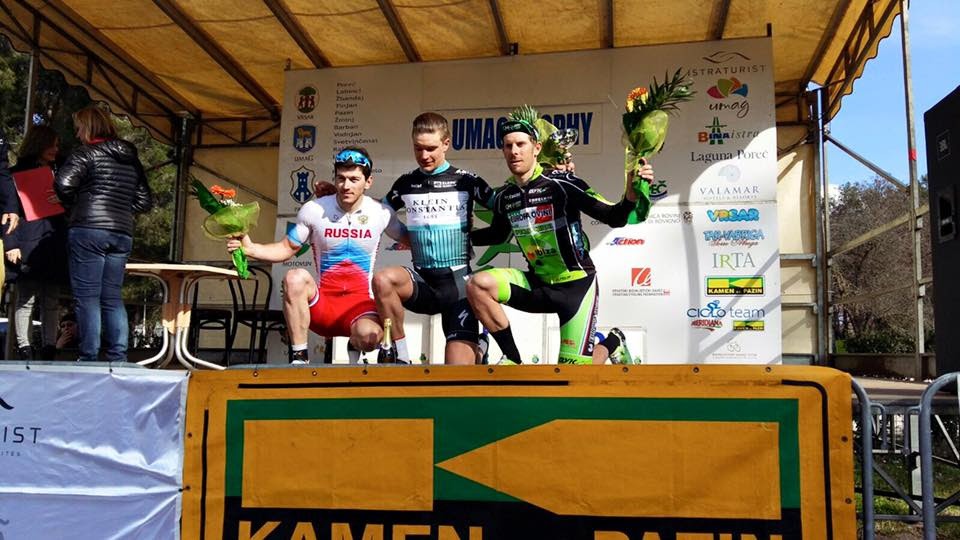 Filippo Fortin is on the podium of the fourth edition of Umag Trophy, a 154 km race that was held in Croatia. There were no major surprised during the race:  the group average speed was very high (46 km/h), so it was impossible for everyone to attack. As expected, the Umag Trophy ended in a sprint: after a great team effort, especially with Matteo Rotondi who helped Fortin in the last kilometer, the #blackandgreen leader got third place behind the Junior world champion Jonas Bokeloh (Klein Constantia) and Mayr Stash (Russian national team).

For GM Europa Ovini it is the first podium of 2016 season but  the team placed already twice in the top ten.
“a hint of regret remains because I was convinced I could win – explains Filippo Fortin – but the good thing is that since the beginning of the season both me and the whole team have been growing, we’ll continue to do well and to improve in the next races.”

“The glass is definitely half full – says the directeur sportif Dario Andriotto – Filippo started very well this year and he has already placed 3 times in the top ten after Challenge Mallorca and Vuelta Valenciana. The goal is to keep improving  starting from Saturday. ”

The next race for GM Europa Ovini will be on Saturday, March 5th at Trofej Porec (Croatia).